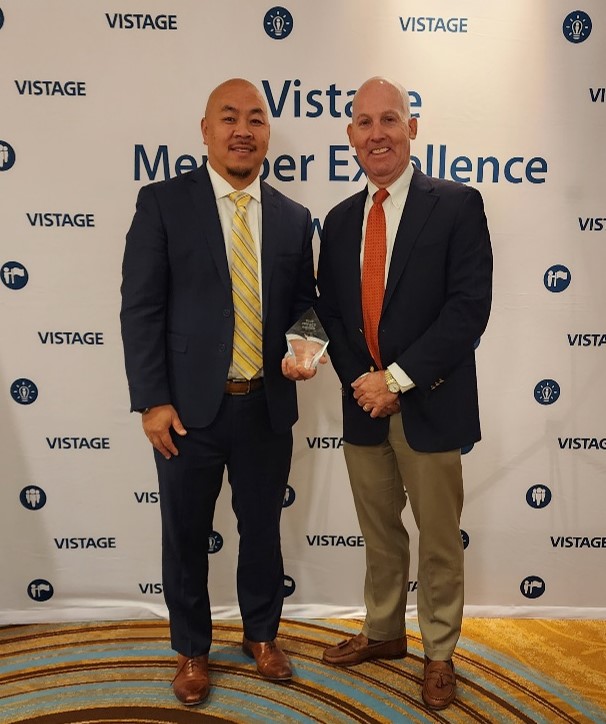 It is our pleasure to announce that Sin Senh, Roux’s President and CEO, has been named the recipient of the 2022 Impact Award by Vistage. Vistage is the world’s largest CEO coaching and peer advisory organization for small and midsize businesses. The Impact Award recognizes remarkable development and achievement of trailblazing members with between one and three years’ tenure.

Approaching his third year as President and CEO, Sin took the helm at Roux in January of 2020. His first year as CEO wasn’t quite what Sin expected—he shared that this unforeseen timing “challenged me like nothing else I or anyone has ever encountered, but it sped up my growth as a leader.” When asked by Vistage to offer an accomplishment he was particularly proud of, Sin chose the firm’s perseverance under his leadership through such a difficult time: “weathering the pandemic without furloughs, layoffs, compensation reductions, or financial hardship by focusing and believing in the people that have made Roux successful for over 40 years.”

Vistage helps CEOs, business owners, and key executives solve their greatest challenges through confidential peer groups and one-to-one executive coaching sessions. As a founding member of the Long Island Vistage CE 5442 Group, Sin is granted the opportunity to speak freely with other CEOs, sharing ideas, strategy, and advice. In his interview with Vistage, Sin offered his top three pieces of advice based on his leadership journey:

“It’s an honor to receive the 2022 Vistage Impact Award and be able to share with so many thought leaders,” Sin said. For more Vistage Q&A, check out the video below.